MAb Anti GST-Tb cryptate is an IgG2a raised against Glutathione S-transferase labeled with Tb. It has been shown to react with GST-tagged fusion proteins from a large number of expressing vectors.

This reagent can be used in both biochemical and cellular formats to study a wide variety of interactions: protein/protein, protein/peptide, protein/DNA, protein/RNA, protein/carbohydrate, protein/small molecule, receptor/ligand.

HTRF can detect a broad range of affinity constants ranging from picomolar to low millimolar.

Our distributors
In an HTRF interaction assay, one partner is labeled (directly or indirectly) with the donor, and the other with the acceptor (again, directly or indirectly). The intensity of the signal is proportional to the binding of the 2 partners. In the example shown here: MAb Anti GST-Tb cryptate binds to the GST tagged partner A while partner B* binds to a specific Ab labeled with an HTRF acceptor. *partner B can also be biotinylated, tagged, Fc fused. In these cases, use the corresponding HTRF reagent (anti-Tag, anti-species, protA, Streptavidin) labeled with acceptor for the detection.

The example on the right describes the protocol using a 20 µL final assay volume for detecting an interaction between a GST-tagged partner A and a non-tagged partner B*. Dispense the 2 partners (10 µL), incubate, add MAb Anti GST-Tb cryptate (5 µL) and anti-partner B labeled with acceptor (5 µL), incubate and read. *partner B can also be biotinylated, tagged, Fc fused or directly labeled. In these cases, use the corresponding HTRF reagent (anti-Tag, anti species, protA, Streptavidin) labeled with acceptor for the detection.

Cryptate conjugates must not be excessive in order to prevent reader saturation and an unacceptable level of background. In most cases, a cryptate concentration of 1 to 5nM is appropriate, and will generate 20,000 to 80,000 cps at 620 nm depending on the HTRF compatible reader used. The XL665 conjugate must match its assay counterpart as closely as possible in order for the maximum number of biomolecules to be tagged with the XL665 acceptor. Thus, to detect a tagged molecule at an assay concentration of 20nM, the concentration of anti-Tag-XL665 should be equimolar or higher.

In collaboration with Scripps - Scientific Presentations

In collaboration with Sanford/Burnham - Scientific Presentations

The use of HTRF in biologics discovery

In collaboration with MedImmune - Scientific Presentations

HTRF: One technology, many uses in a pre-clinical laboratory setting

In collaboration with MRC - Scientific Presentations

Benefit from unlimited flexibility for your assay development - Flyers

Addressing the interactome with protein-protein assays

Cover all PPIs with one approach - Brochures

HTRF -A Beneficial Tool for Lead Optimization of Biotherapeutics

In collaboration with Boehringer Ingelheim - Posters

The ultimate guide to PPI assays with HTRF

Every interaction is within range - Technical Notes

HTRF PPI your dream assay served on a plate

A brief history of Protein-Protein Interactions

How well do you know PPI? - Infographics The ultimate guide to PPI assays with HTRF 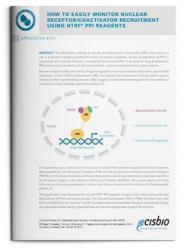 5/21/19 Research Highlights Life Science
Development of a HTA for Inhibitors of the Polo-Bo...

Build your own protein complex for a successful Plk-1 screen!

A review of applications to the study of molecular interactions involved...

Description of the basics of the technology and review applications